What an opportunity to see The Stars play at the Studio. A venue that could easily fit multiple times inside Webster Hall where they played the night before. The night was very intimate, playing to maybe 50 people. The band still put on their theatrical big show playing intensely and throwing roses to the crowd. Although I wasn’t thrilled with the new album when I heard it for the first time, after repeat listens it has subsequently become my favorite album of 2010. It’s a moody and melodic album with some very catchy songs sprinkled throughout. The band has been promoting the album heavily with many live shows showing their confidence and praise for the record. The band gave a lot of love to the crowd and New York specifically, which has always welcomed the band with open arms. In a matter of 5 days I’ve seen 3 great bands in really intimate venues. What a great week for music. When I saw Margot & the Nuclear So and So’s open up for Cloud Cult, they warranted another live visit. Although this band has some solid tunes, they had an underwhelming crowd meet them tonight. The recent band restructuring may have lost them a few fans and although a few were overzealous, overall the night was a drain. The band had their usual ensemble of multi instruments but without the their horn and strings along with the absence of Emily Watkins, really hurt the sound.
http://margotandthenuclearsoandsos.net/ When I heard that they would be releasing 10 tickets to The Posies at the tiny Rock Shop, you know that I was at the front of the line. Tonight they played from their 7th studio album Blood/Candy. The record is slower and more melodic than in previous releases. It unfortunately falls victim to the same problem as their last one where there are 2-3 great hits surrounded by a lot of fluff. However, they played the album with tight precision, and it’s always a pleasure to see Jon Auer and Ken Sttringfellow show off their musical skills. Ken mentioned that his father despite working in NYC was in brooklyn for the first time. “This morning, he had to look up ‘Brooklyn’ and ‘vegan’ in the dictionary,'” Stringfellow said. 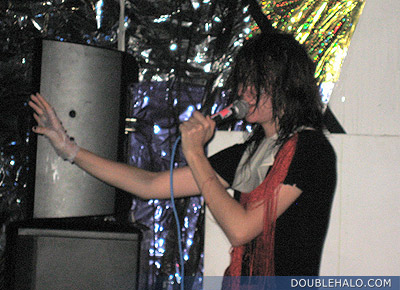 To celebrate 10 years of musical energy, the Yeah Yeah Yeahs played a super small show for about a hundred lucky crazed fans at Secret Project Mighty Robot. It was hot & sweaty even before it started and as soon as the band hit the stage, everyone went completely nuts. Karen Oh appeared with an intense religious costume that slowly got removed as the show progressed to reveal a darker ensemble. The setting of a run down art gallery with trippy video projections was a perfect setting for the show. For a band of such caliber, it was a nice treat for the band to celebrate in such an intimate setting. There was so much energy in the air as they played their hits as well as some really old ones. This ranks as one of the best shows I’ve been too almost eclipsing the time I saw them at Maxwell’s. My ear drums are still hurting from the one. It’s hard to put the show into words, but if you’ve witnessed the band play live before, you know the intensity this band brings. Capturing that explosion in such a tight space was overwhelming. It’s nights like this that make me love the little and big things about New York. Thanks to Gordon for waiting in line for hours for the exclusive tickets.